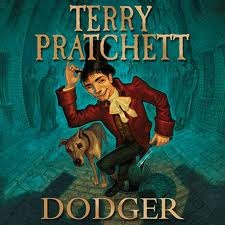 Another blind library find. I have not read any of Terry Pratchett’s other books (and there are many) so this was a surprise.

Blurb: (Goodreads) A storm. Rain-lashed city streets. A flash of lightning. A scruffy lad sees a girl leap desperately from a horse-drawn carriage in a vain attempt to escape her captors. Can the lad stand by and let her be caught again? Of course not, because he’s…Dodger.

Seventeen-year-old Dodger may be a street urchin, but he gleans a living from London’s sewers, and he knows a jewel when he sees one. He’s not about to let anything happen to the unknown girl–not even if her fate impacts some of the most powerful people in England.

From Dodger’s encounter with the mad barber Sweeney Todd to his meetings with the great writer Charles Dickens and the calculating politician Benjamin Disraeli, history and fantasy intertwine in a breathtaking account of adventure and mystery.

What I liked: Most everything. I am a Dickens fan so when I started this, I thought I had started a book that was written in Dickens time. It was supposed to take place in the mid-1800s. I came to find out it was published in 2013! Pratchett does a wonderful job with the language – I enjoyed all the old English slang: tosher -a person of the sewers, Richard – from kind Richard the third, which rhymes with ____, Peelers – the name for a policeman after Sir Robert Peel, head of police in London… (As a writer, I would like to know how one finds out what the slang was in 1800 London!) Then Pratchett puts Dickens and Sweeny Todd in the story in such an artful way, it just ups the comedy. Much as Dickens novels, it’s a commentary of the hard times and inequities of the different classes, though he has you wanting to join Dodger in the sewers much more than hobnobbing with the upper class. It also has a happy ending. The book couldn’t go any other way for such an upstanding young man. I listened to this and I took it back to the library before I could note the narrator, but he does a wonderful job.

What I didn’t like: Honestly, I can’t think of anything. (See, Rachel, I can find books that I’m not critical of!)

Rating: 5/5    I’ll have to try more of Terry’s books, though I don’t think he has any more like this one from what I can tell.

4 comments on “Dodger by Terry Pratchett”