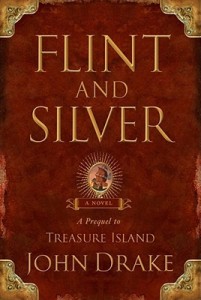 Another of my audio book library roulette picks. Note: This is not a child’s pirate story. This is for adults.

Blurb: John Silver had never killed a man. Until now, his charisma, sheer size and, when all else failed, powerful fists had been enough to dispatch his enemies. But on a smoldering deck off the coast of Madagascar, his shipmates dead or dying all around him, his cutlass has just claimed the lives of six pirates. Finding himself surrounded by their revenge-thirsty crewmates, Silver fears his promising merchant navy career is at an end. But then the pirate captain makes him an offer he can’t refuse.

On the other side of the world, Joseph Flint, a naval officer wronged by his superiors, plots a bloody mutiny. Strikingly handsome, brilliant but prey to sadistic tendencies, Flint is regarded as the most dangerous bandit on the high seas.

Together these gentlemen of fortune forge a deadly and unstoppable partnership, steering a course through treachery and betrayal while amassing vast treasure. But the arrival of Selena, a beautiful runaway slave with a murderous past, and Flint’s schemes to secure the pieces of gold for himself trigger a rivalry that will turn the best of friends into sworn enemies.

What I liked: I think Drake did well in capturing the feel of swash-buckling pirates and the time period and making up a good story for John Silver and Captain Flint pre-Treasure Island. He probably makes John Silver a little to good, but he does well with the nasty Mr. Flint. It really makes you want to read Treasure Island again, and I probably will. I just picked up an original book at a estate sale last weekend. He also makes Selena – the woman Silver loves – more of a character and more sexy than she was in  Treasure Island, which would make sense since TL is a children’s book and this is not. Tim Gregory does a fine job narrating this tale. It must have been fun doing the pirate voices, especially Flint, who he makes the typical growly pirate voice – arrrg.

What I didn’t like: It was a bit slow to get into – partly the story was slow but also it took a bit to get into the pirate lingo.

John Drake has a sequel – Pieces of Eight, which I will probably listen to as well.

10 comments on “Flint and Silver by John Drake”