I have not read any of Elizabeth Peters’ books before, but I like mysteries, so I thought I’d give this one a try. 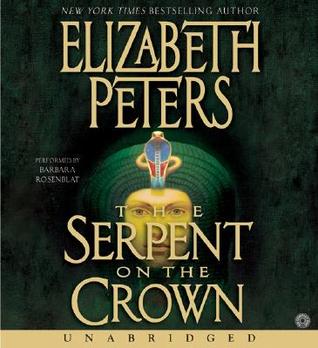 The Emersons have returned to the Valley of the Kings in 1922 and Amelia Peabody and her family look forward to delving once more into the age-old mysteries buried in Egypt’s ever-shifting sands. But a widow’s strange story — and even stranger request — is about to plunge them into a storm of secrets, treachery, and murder.

The woman, a well-known author, has come bearing an ill-gotten treasure — a golden likeness of a forgotten king — which she claims is cursed. She insists it has taken the life of her husband and unless it is returned to the tomb from which it was stolen, more people will die.

Amelia and her clan resolve to uncover the secrets of the statue’s origins, setting off on a trail that twists and turns in directions they never anticipated — and, perhaps, toward an old nemesis with unscrupulous new designs. But each step toward the truth seems to reveal another peril, suggesting to the intrepid Amelia that the curse is more than mere superstition. And its next victim might well be a beloved family member … or Amelia Peabody herself.

What I liked: The ending was quite good, though it took a long time to get there. Each mystery was revealed slowly in the end, which was fine, but I got confused about what character had done what because of how it was drawn out.  I really enjoyed the narrator, Barbara Rosenblat. She was a perfect choice for a story about an English archaeologist family in Egypt. I don’t know how many different voices she did, but there were many and all done well. The writing was good, and as a reader, I could visualize the area and situation.

What I didn’t like: It’s a bit slow – the whole way through, from the question of where the statue came from to when the dead body showed up and who the murder was. If you’re looking for a slow, entertaining summer read, this would be it. If you want a fast-pasted mystery, pick some up something else.