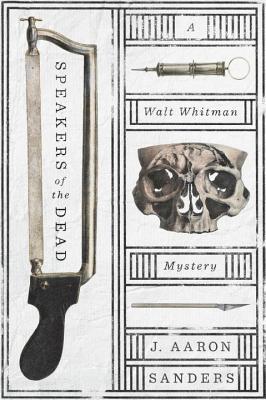 This was a new audio book in my library and since I writing a mystery (Book II in my Agnes Kelly Mystery Adventure Series), I am “reading” mysteries to keep my head in the game, so to speak.

Blurb: (Goodreads) Speakers of the Dead is a mystery novel centering around the investigative exploits of a young Walt Whitman, in which the reporter-cum-poet navigates the seedy underbelly of New York City’s body-snatching industry in an attempt to exonerate his friend of a wrongful murder charge.

The year is 1843; the place: New York City. Aurora reporter Walt Whitman arrives at the Tombs prison yard where his friend Lena Stowe is scheduled to hang for the murder of her husband, Abraham. Walt intends to present evidence on Lena’s behalf, but Sheriff Harris turns him away. Lena drops to her death, and Walt vows to posthumously exonerate her.

Walt’s estranged boyfriend, Henry Saunders, returns to New York, and the two men uncover a link between body-snatching and Abraham’s murder: a man named Samuel Clement. To get to Clement, Walt and Henry descend into a dangerous underworld where resurrection men steal the bodies of the recently deceased and sell them to medical colleges. With no legal means to acquire cadavers, medical students rely on these criminals, and Abraham’s involvement with the Bone Bill—legislation that would put the resurrection men out of business—seems to have led to his and Lena’s deaths.

What I liked: I could tell Sanders did his homework when researching this book, and he even tells some more about his research and what he “played” with as far as historical facts as an author. I always appreciate this since I like history and historical fiction. I don’t know enough about Walt Whitman to have any preconceived notions about his life so having him working on a mystery wasn’t too hard to wrap my head around. Sanders does make you believe most of his characters are real, putting them in real situations for the time, 1843 New York. The story flows and has good dialogue other than what I mention below. Sanders artfully addresses Whitman’s sexual preferences so as not to offend or ignore what is know, which I appreciate as a writer.

What I didn’t like: It really wasn’t much of a mystery. The Whitman character is trying to find out who killed and framed his friends but the answer seems to obvious early on (once you learn about all the characters involved). It was also irritating how many times Sanders – through his characters – talks about the how the use of dead bodies is needed to advance medicine. Since we live in a time when we know this is true, beating this idea into the readers heads is not needed. I understand the characters of the time would be thinking otherwise, but there are other ways to get that point across than say the same thing over and over. No complaints with Mark Bramhall’s performance. He does a wonderful job portraying the male and female characters alike.