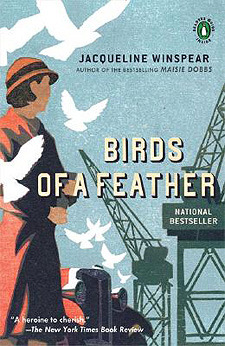 I saw this was available in audio from my libraries e-audio company, so I had to listen.

Blurb: It is the spring of 1930, and Maisie has been hired to find a runaway heiress. When three of the heiress’s old friends are found dead, Maisie must race to find out who would want to kill these seemingly respectable young women before it’s too late. As Maisie investigates, she discovers that the answers lie in the unforgettable agony of the Great War.

What I liked: Winspear doles out her stories in a very relaxed manner but usually not so slow as to put you to sleep. And all the character are created so they come across as very real – Maisie and her side kick in particular (I forget his name). The narration by Kim Hicks only adds to this with her exceptional rendition of the book. Each voice was very distinct and personal. The story itself seems very plausible as well, and illustrates an aspect of the “Great War” that we don’t hear a lot about. I couldn’t figure out “who done it” until the very end, which is always preferred.

What I didn’t like: Maisie’s intuitions are a little to spot on but it’s easy to overlook, since it does take her a bit to figure out the mystery. And it’s a bit hard to believe that the small clues that she finds at 2 of the murder scenes would have still been there to be found by Maisie (I won’t give away what these were because they are integral to the story), but it is fiction, after all.