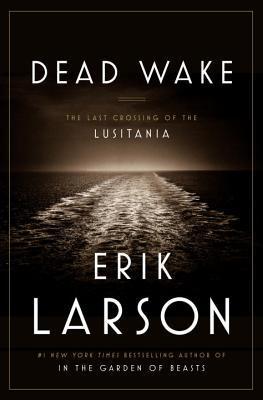 I read Erik Larson’s Devil in the White City and really enjoyed it so when I saw this was available in audio from my local library, I thought I’d give it a try.

Blurb: On May 1, 1915, a luxury ocean liner as richly appointed as an English country house sailed out of New York, bound for Liverpool, carrying a record number of children and infants. The passengers were anxious. Germany had declared the seas around Britain to be a war zone, and for months, its U-boats had brought terror to the North Atlantic. But the Lusitania was one of the era’s great transatlantic “Greyhounds” and her captain, William Thomas Turner, placed tremendous faith in the gentlemanly strictures of warfare that for a century had kept civilian ships safe from attack. He knew, moreover, that his ship–the fastest then in service–could outrun any threat.

Germany, however, was determined to change the rules of the game, and Walther Schwieger, the captain of Unterseeboot-20, was happy to oblige. Meanwhile, an ultra-secret British intelligence unit tracked Schwieger’s U-boat, but told no one. As U-20 and the Lusitania made their way toward Liverpool, an array of forces both grand and achingly small–hubris, a chance fog, a closely guarded secret, and more–all converged to produce one of the great disasters of history.

What I liked: As Larson’s White City book, you can tell he has done his research. This “story” doesn’t have the real-life oddities that the White City story has but if you like history (and you have to like history to read this book), it gives you details and insights that you might not get in a history book. It has many first person accounts, but since I was listening to this, I don’t know if they were direct quotes. They sounded like it. Larson weaves a lot of different aspects of the ship’s journey and sinking with cold facts, but in a way that is generally entertaining. He also must have had access to the log of the submarine that sunk the ship because there is much information about what occured on that vessel as well. All the different things that had to be in place for this very large and famous ship to sink makes one wonder. Not to mention that the British really should have been escorting the ship when it got close to Ireland. Seems like that was quite on purpose – to pull the US into the war. Hard to really believe otherwise, though Larson doesn’t come right out and say this. Scott Brick’s narration helps move the story along.

What I didn’t like: It is a bit long. I’m glad I was listening to it vs reading it. As I mentioned, you have to be a history buff to want to read this book.