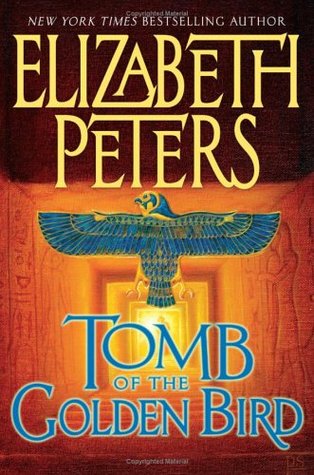 I had listened to this audio book before, but it had been so long ago that I didn’t remember the outcome, so I gave it another go.

Blurb: Convinced that the tomb of the little-known king Tutankhamon lies somewhere in the Valley of the Kings, eminent Egyptologist Radcliffe Emerson and his intrepid wife, Amelia Peabody, seem to have hit a wall. Having been banned forever from the East Valley, Emerson, against Amelia’s advice, has tried desperately to persuade Lord Carnarvon and Howard Carter to relinquish their digging rights. But Emerson’s trickery has backfired, and his insistent interest in the site has made his rivals all the more determined to keep the Emerson clan away.

Powerless to intervene but determined to stay close to the unattainable tomb, the family returns to Luxor and prepares to continue their dig in the less promising West Valley—and to watch from the sidelines as Carter and Carnarvon “discover” the greatest Egyptian treasure of all time: King Tut’s tomb. But before their own excavation can get underway, Emerson and his son, Ramses, find themselves lured into a trap by a strange group of villains ominously demanding “Where is he?” Driven by distress—and, of course, Amelia’s insatiable curiosity—the Emersons embark on a quest to uncover who “he” is and why “he” must be found, only to discover that the answer is uncomfortably close to home. Now Amelia must find a way to protect her family—and perhaps even her would-be nemesis—from the sinister forces that will stop at nothing to succeed in the nefarious plot that threatens the peace of the entire region.

What I liked: I particularly like listening to Barbara Rosenblat. Listening to her you can understand why Barbara has so many acolades. She is great at doing different voices, men included. Since I am a history buff, I enjoyed the historical info around the uncovering of the tomb of Tutankhamon. I assume with Peters background, much of this information was accurate. This is the only Amelia Peabody Mystery I’ve read, even though it’s #18 in the series. Peabody is an interesting character and I like her husband, Emerson, but she seems to know an awful lot or is a really good guesser.

What I didn’t like: Peters takes a lot of time talking about the uncovering the tomb of King Tut so I thought something was going to happen (a murder, of course) around this part of the story (spoiler alert) but nothing does, instead the subplot becomes the main plot at the end and was something the reader had no way to even guess at. Maybe if I knew the history of the people and the time I might have thought it was an option, but it kind of felt like it was pulled out of thin air. Not a satisfying end for me.