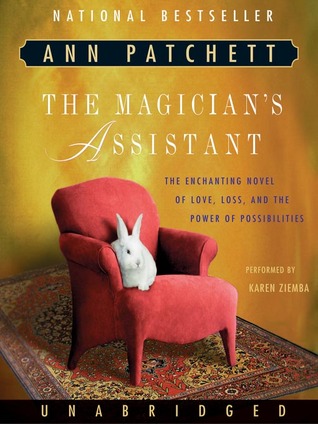 I was given Bel Canto (another Patchett book) from my daughter and enjoyed it so I thought I’d try this one too.

Blurb: Sabine– twenty years a magician’s assistant to her handsome, charming husband– is suddenly a widow. In the wake of his death, she finds he has left a final trick; a false identity and a family allegedly lost in a tragic accident but now revealed as very much alive and well. Named as heirs in his will, they enter Sabine’s life and set her on an adventure of unraveling his secrets, from sunny Los Angeles to the windswept plains of Nebraska, that will work its own sort of magic on her.

What I liked: The story was entertaining. I really enjoyed the magic. It shows Patchett’s skill to make writing about magic entertaining. Her characters are all very real and their actions, emotions, and interactions all believable. The winter in Nebraska sounded more like my home state of Wisconsin but since I’ve never been in Nebraska in winter, I can’t really say how accurate it was. What makes a writer think – ‘I’ll write a story about love and loss and make the main character a magician’s assistant’? Interesting.

What I didn’t like: The ending was a bit disappointing. Not sure what I was expecting but it made me feel… disappointed. That is the best word for it. There was a touch of hope, which saved it but still just… disappointing. It’s interesting how an ending can color your feeling of a book.