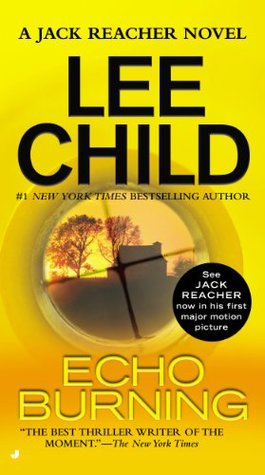 I needed an audio book to listen to and this one was available from my library.

Blurb: Thumbing across the scorched Texas desert, Jack Reacher has nowhere to go and all the time in the world to get there. Cruising the same stretch of two-lane blacktop is Carmen Greer. For Reacher, the lift comes with a hitch. Carmen’s got a wild story to tell—all about her husband, her family secrets, and a hometown that’s purely gothic. She’s also got a plan. Reacher’s part of it. And before the sun sets, this ride could cost them both their lives.

What I liked: This story was interesting because it had Reacher stumped (and me too). In the typical Child way, Reacher figures things out the only way Reacher can, with his background knowledge of… (I won’t tell you and give away the fun of discovery). As usual, Child’s characters are all so real and the situation plausible (mostly). The setting helps enhance the mood of the story and the child increases the stakes. And in the typical Child way, there are people in the story that you don’t know why they are in the story until toward the end. I always enjoy Dick Hill’s narration of the Reacher stories. He was a good pick for the job.

What I didn’t like: Some of the detail is overdone a bit but that is Child’s style too. Easy to overlook in an audio format.