Thought I’d share a picture within a picture. This is my son in a studio at his art school. He is going to SVA (School of Visual Arts) in New York city. It’s a wonderful opportunity for him: wonderful school, exiting city to live in… He’s in his junior year and learning a lot. I like this picture because of the color: Aaron’s sweater matching his artwork, because of the perspective: him and his supplies with the art in the background, and because it’s my son! Of course. Nice job, Aaron! 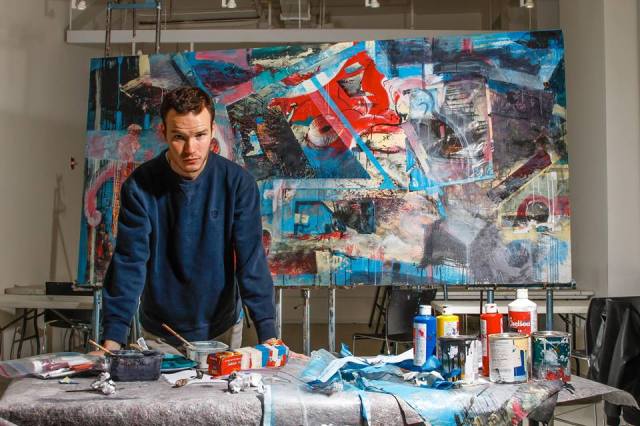 I am a fan of New York City so when I heard that today is the 100th Anniversary of Grand Central Station, I just had to write about it. I think New York City is a wonderful place to visit, though I wouldn’t want to live there. I love it for it’s diversity – any city that has a flower district is all right by me – and for it’s history, so rich in culture and the epitome of the birth and life, the socio-economic life, of a city in these every changing United States. These are a few pictures I took on my last visit there this last summer.

When I visited the city after graduating from college in 1983 – I’m dating myself here – the station was dirtier and not as posh. The very clean vestibule I picture here had a good share of homeless people camped out in it. There were shops the food vendors then, but it wasn’t as high class as it is today. The city did a wonderful job cleaning it up in the 1990s.

Here are few fun facts: Grand Central Station is the largest indoor public space in New York. It was built by the Vanderdilt family – they owned the New York Central Railroad at the time. It has (had?) more tracks and train platforms than any other station in the world.

I remember  seeing a long line of train tracks and platforms just off the main area then discovering there was another whole set right underneath it! When I lived in Connecticut, I would take the commuter train from Westport into the city. I was amazed as how many people did that each and every day- and still do!

Daniel Brucker – manager of the GCS tours – says that 750,000 people walk through the station every day – that is more than the entire population of Alaska! I was amazed to learn that in the 1960s the New York Central Rail Co. was bankrupt and there was talk of tearing down the building and building another sky scraper – just what New York needed!  At the time, the building was in a sad state of disrepair. Luckily many others saw the importance of preserving this building – including Jacqueline Kennedy Onassis – so the Supreme Court established the landmark conservancy act with Grand Central Station being the first building it saved. It is a must see spot in any New York City tour.

Day two in the Big Apple was as fun as day one but, it was bitter sweet – it ended by saying goodbye to the boy who to going to learn so much in his time in the big city, and I’m not talking about the art school, though he’ll learn a lot there too.

It was fun kids – thanks for hanging with your old Ma!

I’ve been absent for a couple reason – first was getting my book to the printer. After a SNAFU they have it, and now hopefully can use it (unlike the first one I sent them). Now it’s a trip to the Big Apple taking my son to his first year at SVA – School of Visual Arts on 23rd Ave downtown. Here are a few pictures from our trip so far. We made it from our hotel in Little India in Jersey City under the Holland Tunnel into town and out again.

Onto day two – Grand Central, Statue of Liberty (if it’s open after the shooting), Central Park, and a comic book shop for Aaron.